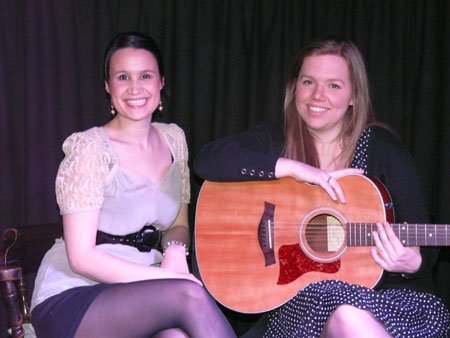 Amy and Clare are a professional covers duo that regularly gig throughout London and the South East. The duo met whilst studying at The Academy of Contemporary Music and have performed together in various bands and acts for over 3 years. As a member of the ACM Gospel Choir, Amy has had the opportunity to perform at many prestigious venues including O2 arena, Wembley Stadium and Windsor Castle for Her Majesty the Queen.

Rolling In The Deep

You Make It Real

As well as being an accomplished performer Amy is a highly acclaimed teacher of Dance and Voice. Amy has a strong stage presence and an engaging performance to compliment her vocal ability. Clare is a dedicated musician and has been playing guitar for 8 years. She graduated from The Academy of Contemporary Music with a 1st Class BA Honours in Popular Music Performance and plays regularly in a number of function bands and duos as well as a guitarist for emerging artists.

The Monkees – I’m a Believer

Jackson 5 – I Want You Back

Sam Cooke – That’s It I Quit I’m Moving On

Otis Reading – Sittin’ On The Dock of the Bay

The Impressions – People Get Ready

Tom Petty and Stevie Nicks – Stop Draggin’ My Heart Around

Michael Jackson – Man In The Mirror

James Morrison – You Make It Real

Adele – Rolling In The Deep

Lauren Pritchard – Not The Drinking

Amy Winehouse – Stronger Than Me

Kings of Leon – Use Somebody

Sixpence Non The Richer – Kiss Me

Florence and the Machine – You’ve Got The Love

Take That – Rule The World

James Morrison – Right By Your Side

Corrine Bailey-Rae – Put Your Records On

Katy Perry – Thinking of You

What is an Acoustic or Unplugged Band? Acoustic Bands or Unplugged Bands as they are known were made famous in the 1990s by artistes like Rod Stewart. Acoustic instruments from the band were used, they mainly removed the electric guitars and replaced them with acoustic only guitars, but all other instruments remained the same. Electric keyboards were removed as well, with the exception of Hammond organs still in place. As the years past, the more established artistes had a full orchestra to back them up and still called them unplugged sessions.
Will an Acoustic Unplugged Band be Loud Enough? Most Acoustic Bands are amplified with electric amps and speakers but without electric instruments, this still ensures the volume can be turned up or down for the amplified acoustic instruments.
What if the Venue does not allow amplification? Don't use the venue, get them to return the deposit back. It is not worth spending your money, while all you can hear on your special day are the people who have drunk the most, thus overpowering the band who are struggling to play loud enough without amplification.
I have no choice, I have booked a Venue that does not allow amplification and I am stuck with this venue?In this scenario, we suggest using an acoustic band which is as large as space and budget would allow to try and get them to be loud enough. Another option would be to use a roaming acoustic band. The truth is, the party is never going to be able to go up a gear without electric amplification and there wont be much real dancing, only novelty dancing by your drunk uncle Tom !
What is an ideal size for an acoustic band? This really depends on the band itself and the mood you are going for, bands are generally from a 2 piece to 5 piece and prices start at £550.00. The smaller the band, the more background their presence will be.
%d bloggers like this: