Miranda is a professional freelance multi-instrumentalist, playing flute, alto saxophone and piccolo. She is also an accomplished jazz vocalist. Miranda studied flute at the University of Leeds with Jennifer George. Whilst studying she set up her own funk band MindFunk and played flute/sax in the pit band for the Stage Music Society. She also gained orchestral experience with the Symphony and Chamber Orchestra. Miranda uses her classical and jazz skills to improvise with a DJ and create a unique sound on the flute. 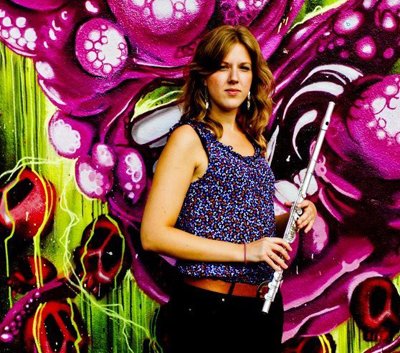 After completing a successful tour playing flute in Australia with the Mal Hamilton Experience in 2010 she returned to the UK to start a career as a session musician. As the only female flute beatboxer in the UK she has performed at leading arts festivals and performed with many urban artists including Fuse ODG (Azonto) and The Hip Hop Shakespeare Company. Performances draw from jazz improvisation to classical songs mixed with beatboxing and hip hop ideas.

Miranda was recently nominated for a Spirit of London award for Achievement through Music – for pioneering flute beatboxing in the UK for women. She met David Cameron and was a guest at the awards ceremony at the Royal Albert Hall. She also made it to the final of the Rhythm of London competition in 2011 performing at the Royal Festival Hall in front of industry judges. Currently Miranda is the resident saxophonist with Milomax function band, performing regularly at high profile corporate and private events.

Whilst at college and University Miranda developed a passion for dance music and jazz. She was offered the opportunity to develop this working with the producer Ben Startup and the Tali Trow Collective recording on two albums and gaining studio recording experience. Miranda is experienced in improvising along with a DJ to House music, Dubstep and Drum and Bass. She also plays in pit bands for musical theatre as a reed doubler and enjoys all kinds of music from classical to jazz to urban genres.