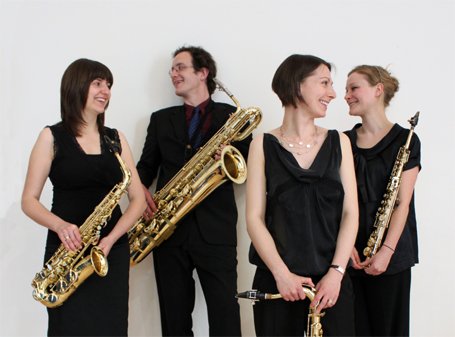 I Just Called to Say I Love You

They have handpicked a selection of the best pop tunes of all time and they have been arranged especially for their by composer/arranger extraordinaire Ed Puddick. You won’t hear these arrangements anywhere else, and you’ll know and love the tunes, from Stevie Wonder to Take That via Michael Jackson! They have a huge range of music, but they do take requests, so if you have a special song that you would like that isn’t already in their pad, let them know beforehand and they will play it for you!

Some of the songs they do: Play That Funky Music, 9 to 5, Thriller, Street Life, Tears of a Clown, Signed Sealed Delivered.

Repertoire List
Street Life – Randy Crawford
An Englishman in New York – Sting and the Police
Dancing in the Street – Martha Reeves and the Vandellas
Tears of a Clown – Smokey Robinson
Stevie Wonder Medley
Thriller – Michael Jackson
Jackson Five Medley
Play That Funky Music – Wild Cherry
Crazy After All these Years – Paul Simon
Don’t Stop ‘til You Get Enough – Michael Jackson
Earth, Wind and Fire Medley
I can See Clearly Now – Johnny Nash
Breakout – Swing Out Sister
Young Hearts Run Free – Candi Staton
Everlasting Love – The Love Affair
Everything – Michael Buble
Two Hearts – Phil Collins
You to Me are Everything – The Real Thing
Don’t Know Why – Norah Jones
Everybody Wants to Rule the World – Tears for Fears
What a Fool Believes – Doobie Brothers
Dancing on the Ceiling – Lionel Richie
Rock With You – Michael Jackson
How Deep is Your Love – Bee Gees
It Must be Love – Madness
Man in the Mirror – Michael Jackson
Here, There and Everywhere – The Beatles
Chapel of Love – Dixie Cups
59th Street Bridge Song – Paul Simon
Cupid – Sam Cooke
I Say a Little Prayer – Aretha Franklin