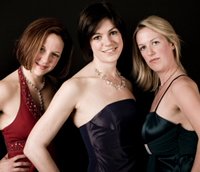 Belle Nuit is our sizzling fresh crossover act of lovely ladies performing musical theatre and opera hits to up beat backing. Our sirens will draw in even the least musical of your guests as well as giving the most discerning opera going audience a performance to rival that which they will find in the best opera houses.

The performance of these lovely ladies at your dinner or party will bring down the house… The girls give a stunning performance which includes gorgeous harmonies and solo numbers. Depending on the scale of your event and budget they can be perform in full format with the four voices, or reduced down to three or even two to enchant at smaller functions.

I could have danced all night

Sara, soprano (the fiery red head) earned her Masters Degree with Departmental Distinction in Vocal Performance from the San Francisco Conservatory of Music. Her operatic lead roles have included Gretel in Hansel and Gretel and Susanna in The Marriage of Figaro, and she has performed in many venues such as Covent Garden’s Royal Opera House and Painters Hall. 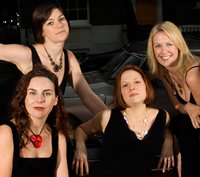 Cath, soprano (the sassy blond) recently completed her studies at the Guildhall School of Music and Drama. Her performances include Cinderella in Steven Sondheim’s Into the Woods and she has performed on the Palladium stage, at The Royal Albert Hall, The Palace Theatre and Westminster Abbey.

Ksynia, mezzo soprano (our statuesque brunette of short chestnut locks) is currently completing her Masters at the Royal Academy of Music. She has sung roles such as Cherubino, Hansel, Nancy, Dorabella and Carmen for a variety of companies including Raymond Gubbay, the Buxton Festival, Northern Chamber Opera and Philharmonia Voices in venues such as the Royal Albert Hall and the Barbican.

Lisa, mezzo (our petite brunette of luscious long curls) completed her Masters of Performance in Opera at the Sydney Conservatorium of Music. She has sung as a soloist at the Tri-nations Rugby League, the Design Awards, and for audiences including the Australian Prime Minister at Angel Place Recital Hall in Sydney.

…But then if you are feeling a bit sorry for the ladies in the audience, perhaps missing Nessun Dorma, or just want to …

add on a bit of surprise for sheer fun, the act can also appear ‘Hot Opera Plus” when half way through the performance appears the fifth ‘lady’ ….our not-so-punctual and always-looking-for-a-reason-to-dress-in-drag-tenor, Russell, whom will burst in mid-performance to add his lyric tones and adding some of the fantastic tenor repertoire to the show.

Client Comment
“We all enjoyed ourselves and your singers will be on the lips of everyone for quite a time, you were all excellent.”
–Graham