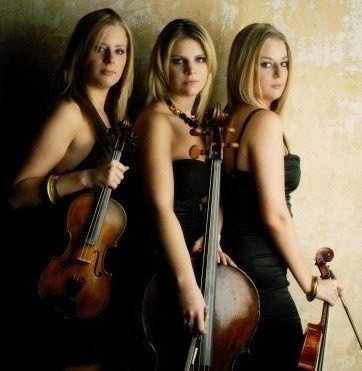 Formed in their youth over ten years ago, the Cavey Trio have played at many different important events, including The National Music Awards Week and CD:UK and regularly perform at prestigious establishments such as The Grosvenor House Hotel, The Hilton and The Savoy.

I Could Be Happy’-from ‘The Boyfriend’

Here There and Everywhere’-The Beatles

They were head-hunted to feature alongside Cirque De Soleil in Spain, and recently travelled to Dublin to record for a music video with Enya. The trio have been involved in playing at the televised National Music awards, for which they were asked to arrange and perform songs from the number 1 hit band ‘The Feeling’ and were also chosen to represent Classical music for the nationally screened BBC series, Singing with the enemy. 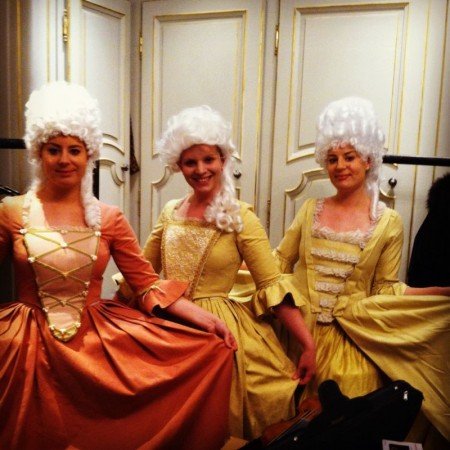 The girls have worked with many artists including the Spice Girls, Lemar and Enya and have performed worldwide including in Australia, China, Dubai, and throughout Europe.

Stephanie and Natalie, born in 1986, started learning the violin at the age of 7. Within two years, and in company with their elder sister and younger brother, the twins were both awarded a Specialist Music Scholarship to Wells Cathedral School, studying violin with Patricia Noall – the only time the school has had 4 music scholarship- holding siblings attending simultaneously. The twins opened the Minehead & Exmoor Festival in 2000 with a joint Young Artists recital, for which they received most favorable notices, and also succeeded in gaining a place in the final of the Young Musicians Platform concert in 2003 as part of The 2 Moors Festival.

As a solo performer, Stephanie soon started winning numerous 1st prizes in music festivals around the West Country, including those at Exeter, Taunton & Bath. She reached the String Semi-Finals of the BBC Young Musician of the Year competition in 2003, finally competing against 12 of the best players from around the country. She also performed as joint soloist (again with Natalie) in Mozart’s Sinfonia Concertante with the Wells Chamber Orchestra in 2004 to much critical acclaim. Her orchestral achievements have included membership of the National Children’s Orchestra for five years (co-leader for one) and also the National Children’s Chamber Orchestra and now plays frequently with the renowned ‘Locrain Ensemble’. Stephanie is also fast gaining recognition for her work in more up-to-date genres, playing at various venues around the world.

Natalie also soon started winning numerous 1st prizes in music festivals around the West Country, including those at Exeter, Taunton & Bath. She was a Regional finalist in the BBC Young Musician of the Year competition in 2002. Her orchestral achievements have included membership of the National Children’s Orchestra for five years and also the National Children’s Chamber Orchestra. As both violinist and viola player, she was in her school’s Symphony Orchestra, its String Chamber Orches­tra and various other chamber groups. She was twice awarded a place with the National Youth Orchestra of Great Britain, playing in the viola section.Once in the 6th form, she decided to concentrate exclusively on studying the viola, and as a result had lessons with the Head of Strings, the internationally renowned viola virtuoso Philip Dukes. As a chamber musician, she was a member of ‘Procorda'(the National School for Young Cham­ber Music Players) for two years, and now frequently represents the school in chamber concert performances around the country.

Clementine began the cello at the age of five with her mother, who studied cello at the Royal Academy of music with Derek Simpson. Clementine Studied as a specialist musician at Wells Cathedral School, were she was principal cello in the Symphony Orchestra and Chamber Orchestra. She entered many competitions for Cello performance at a young age, never failing to receive 1st prize. During her time at Wells, Clementine was chosen to represent the school at The Victorian College of Arts, Melbourne, Australia, where she performed Elgar cello concerto. She was a member of the National Childrens Chamber Orchestra for two years and the National Childrens Orchestra for 5 years and appeared as leader and co-leader and was awarded a full scholarship to Trinity College of Music in 2004. Since moving to London in 2004 Clementine has worked with the National Children’s Orchestra, The Da Capo Foundation and the recipients of the Lewisham Film Initiative’s 2006 Production Fund. She has played in weddings and functions from a young age and also enjoys arranging and session work, and has arranged music by the number 1 hit band “The Feeling” for the National Music Awards.

Client Comment
The Cavey String Trio were great and helped make our wedding day very special! Thank you so much for all your help in arranging this for us.”
– Best wishes, Anna