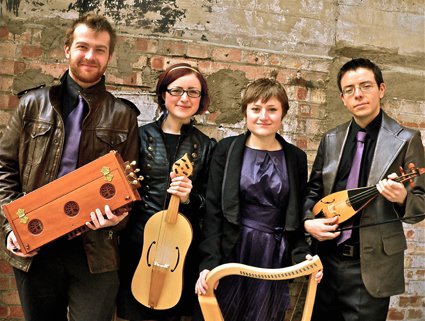 The Medieval Sounds are an exciting new medieval band emerging from London. Formed of musicians from diverse backgrounds in folk, world and early music, they bring together a broad experience from different genres.

This has helped them to create fresh and exciting interpretations of this ancient music, whilst still remaining historically informed. They have an interesting variety of well-researched programmes of music, spanning four centuries from England, France, Spain and Italy. With exotic dance tunes to rousing choruses, their playing enchants all those who hear them. 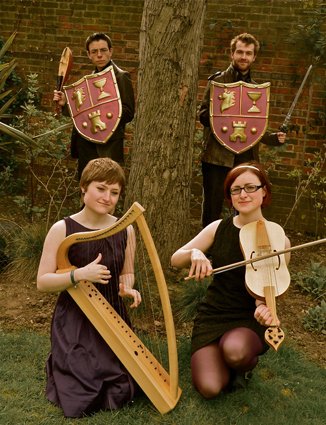 The Medieval Sounds have had successful performances at a variety of venues across England including Brighton Pavillion and Christchurch Spitalfields. From festivals and concert series to music clubs and societies, the Medieval Sounds are a very flexible ensemble. Most repertoire is performed from memory and they have a range portable instruments that can adapt to most spaces – both inside or outside.

The Medieval Sounds are at ease on stage, playing tunes and songs with energy and enthusiasm, aiming to win over the most sceptical of audiences. Performing on a range of fascinating instruments including recorders, bagpipes, vielle, harp, rebec, symphony, oud and a variety
of percussion, this is a band to look out for! 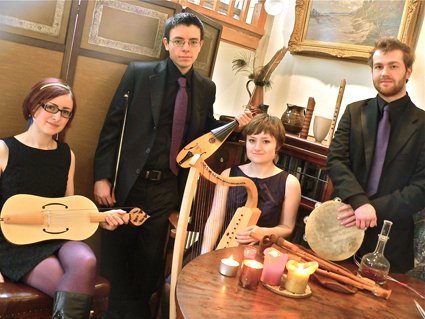 Client Comments
“The Medieval Sounds dust off medieval music, bringing it to vibrant life and connecting directly with audiences through their sheer inventiveness and infectious enjoyment of the music.”
– Clare Norburn

‘The Medieval Sounds showed themselves to be the equal of any early music group performing today; their recital was impeccable, both in technique and musicianship, and also in their relaxed, informative style. Audience response was universally positive and enthusiastic: “the most delightful early music experience ever; exquisite playing and singing of a very well-chosen programme.”

“…stunningly beautiful – I’m not normally an early music fan, but this was fantastic.”
– Nora Heard Spitalfields

“The Medieval Sounds are no ordinary medieval ensemble. Instead of taking us back in time, they bring the music of the past effortlessly into the present day, with a youthful openness, enthusiasm and rhythm that captivated our visitors this year.

With their remarkable array of instruments, wonderful singing and willingness to talk to all ages of visitor, they turned our Family Day into one of the most successful events of the year.”
– Jonathan Sargant