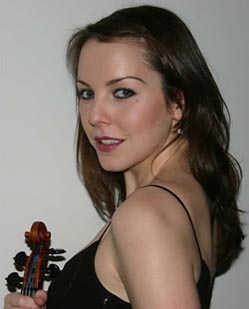 Anna offers a varied mix of classical, romantic and light music that can be tailored to suit the occasion and she is happy to consider any special requests given in advance.

She has played for weddings, in restaurants, for marriage proposals and even in private hotel suites! Anna is happy to discuss the individual nature of each booking and plan her music accordingly.

Anna has been fortunate to perform, tour and record in the U.K. and abroad with big names such as Luciano Pavarotti, Vladimir Ashkenazy, Simply Red, Il Divo, Gorillaz and the Opera Babes.

Anna began learning the violin aged 7 and quickly became involved with many of the orchestras and ensembles in Nottinghamshire, where she grew up.

She auditioned and was accepted at Chetham’s School of Music, a specialist school in central Manchester to study the violin with Malcolm Layfield.  She  chose to go to the Royal Academy of Music in London to study with Howard Davis. There,  she  gained much experience not only in solo playing but also in chamber and orchestral techniques and received coaching from some of the world’s finest musicians. Anna graduated from the Royal Academy with honours. To date she has played with most of London’s top symphony orchestras including BBC Symphony Orchestra, the Royal Philharmonic Orchestra and the BBC Concert Orchestra.

She regularly performs with the New London Soloists Orchestra at St. Martins in the Fields, and has toured extensively across the country with her chamber ensembles. Anna is the leader and co ordinator of the Blue Topaz string trio for which she also writes arrangements. The trio has performed at The Guildhall (City of London), the Kensington Roof Gardens, for the Canadian Embassy, British Telecom and for the Royal Bank of Scotland to name but a few.

Client Comments
“Your playing was such a wonderful addition to our evening and everyone in the restaurant said you were great”
– Linda Sheers, S. London

“Thank you so much for playing for me and my girlfriend last night. You were fantastic and we will definitely book you again”
– Matt Gaskin, Woking