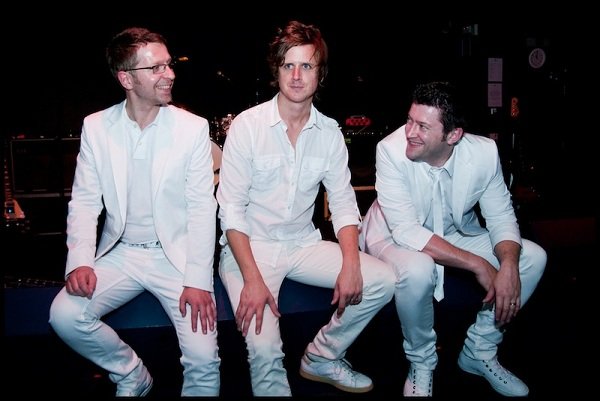 The Forgeres Trio are an Indie Rock Cover Band in London.

The band was formed in 2009, and has since performed at hundreds of bars, weddings, university balls, garden parties, corporate events and private functions as well as music festivals across the country.

As well as being highly skilled instrumentalists, they are all also accomplished lead and backing vocalists. Basically they do the work of six men!

Cliff: guitar & vocals. Classically trained guitarist, vocalist and bandleader Cliff has over twenty years performing experience. He has composed songs, and music for various orchestral ensembles and released an EP.

Cliff sings and plays acoustic, electric, bass and slide guitar, ukulele, and mandolin. He is also a professional guitar and ukulele teacher and prolific YouTube partner, having uploaded over 100 videos.

Max: bass & vocals. Max has been a singer and instrumentalist since childhood. He has played guitar and bass with various jazz, pop and rock line-ups, is an experienced singer/songwriter and has also written musical scores for professional theatre productions.

Chris: drums & vocals. Chris is one of the UK’s top drummers, currently a member of the Ronnie Scott’s Allstars and Gilad Atzmon’s Orient House Ensemble. A Royal Academy of Music graduate, Chris lived in New York for eight years where he played with many of the biggest names in jazz including Mark Murphy and Seamus Blake.

He has performed all over the world including the Blue Note Tokyo, Birdland in New York, the House of Blues in Chicago, The Roxy in LA, Montreal Jazz Festival and countless other venues.

Since relocating to London from New York, Chris has also performed/toured with Kyle Eastwood, Westlife, Marti Pellow, Georgie Fame and Carleen Anderson. He has released two albums as a leader – ‘One’ (2005, Basho records), and ‘Where Land Ends’ (2013, F-IRE).

I just wanted to say a big thank you for playing at our wedding reception. You were absolutely brilliant. Better than we ever imagined, and we had high hopes! It was such a hot evening and everyone wanted to be outside… but they just couldn’t resist your music and had to dance! You were also so calm when the evening was an hour behind in timings, and very reassuring when I had a bit of a panic. We’re trying to think of a reason to have another big party just to have you play again. I hope our paths cross again in the future. Thank you, thank you, thank you!!

How are you all? Hope you got back home OK. We just wanted to say a huge thank you for Saturday, we absolutely loved it! Everyone has said how brilliant you were, you really did make our day! Your setlist was awesome, you really are such amazingly talented musicians. My personal highlight was Nirvana, but loved everything else too! And a big thank you for letting Dave and the gang use your equipment for their little set too. We really hope we’ll be able to hire you again one day for a special occasion. I can’t thank you all enough!