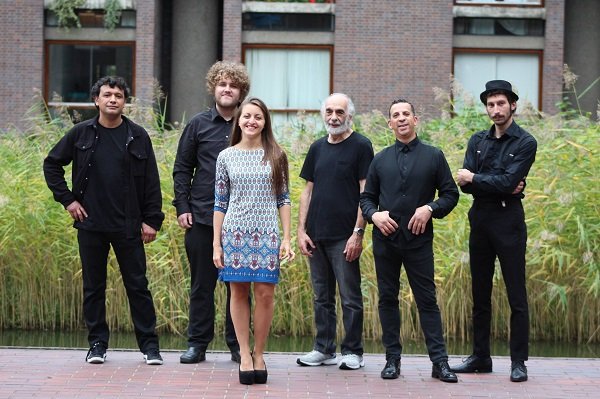 The Latin Jazz Band are a 6 piece band in London.

Mixing a repertoire of covered classics and original material theyaim to bring the party to your venue playing Samba, Blues and Latin Jazz.

Lucrezia – Vocals
She is a Singer, Song Writer, Dancer and Director. She is trained in theatre working with many companies throughout Italy. Relatively new to London she arrived 4 years ago and she is currently studying at the acclaimed Guildhall school of Music and Drama.

Miguel – Tenor Saxophone
Playing in and around London for many years with various Jazz and blues bands Miguel is also a solo artist and has enjoyed performing with a “Madness” tribute band. He regularly performs in a duo with band mate Jorge and has a an ongoing residency at the “Red Lion” hotel at Henley on Thames where he has entertained audiences during the Annual Royal Regatta with his solo music for many years.

Jorge – Guitar
Jorge has performed in Mexico in a band called “Takitos” playing original material. In England he has enjoyed playing in a duo with his band mate Miguel. He brings lashings of tex mex rock and roll vibes to The Duendes and his influences include “The Beatles” and “Syd Barrett” as well as country music and old fashioned Rock and Roll.
​
Iuri – Bass
Iuri was inspired by many different types of music growing up and started out playing classic guitar; his talent securing him a scholarship to play at a prestigious Italian music school. Iuri is a multi intrumentalist and has played in bands for many years using the Electric guitar, Keyboard, Drums, Ukulele and Harmonica. Iuri plays Double Bass in the Duendes.
​
Thomas – Keyboard
Thomas is a London based pianist and singer, Drawing from his influences from the worlds of Jazz, Pop blues and rock he has developed a unique sound that has been entertaining London audiences for years. With his soulful piano and vocals Thomas also performs as a solo artist.

Ed – Drums
Ed has been fascinated by drums and percussion from an early age. Over the years he has played in various bands over the years playing blues, soul, pop covers and heavy rock. Playing as far away as Houston, Texas jamming with country bands, Latin Jazz is a new direction for Ed and he is very passionate about playing with The Latin Jazz Band.

Repertoire List
Watermelon man
Blue Bossa
Tenor Madness
​St James Infirmary
Son of a Preacher Man
If I aint got you
Besame Mucho
​Handsome Man
Equinox
Mas Que Nada
Oye Como Va
​Baby its cold outside
Girl from Ipanema
Wanna make love to you
Our day will come
Yesterday
​You had me
Raunchy
Tequila!
Corazon Esperanto
Quando Quando Quando
Til there was you
Perhaps Perhaps Perhaps
So Nice
Valerie

Following rhythms and styles of Afro-Cuban and Brazilian music, blended with percussion, giving a balanced fusion of European and African sound.

Latin Jazz was a result of a long process of nteraction between American and Cuban music styles intertwined together to form 20th Century New Orleans’ early Jazz, that had a distinctive syncopated (accents transitioned to weaker beats) rhythmic character.

The city’s well renowned pianist and composer at the time, Jelly Roll Morton, referred to the Latin influence on Jazz as a “Spanish Tinge”.

The Cuban Habanera Rhythm was very quickly adopted by American Musicians (a syncopated four beat pattern) and could be heard in many of their compositions; especially the popular 1914’s St Louis Blues by W. C. Handy.

Sounds of American Jazz eventually spread through to the Caribbean simultaneously as Latin American melodies and dance rhythms made their way to North America Regions.

Across the entire region, both musicians and bands became more versed with the musical languages, where larger bands soon expanded their own repertoire into congas and rumbas, two types of Afro-Cuban dance music.

Drummers of Afro-Cuban style music played a fundamental role in developing Latin Jazz from the late 1940s through to the 1960s, as it gave the genre its visibly inexhaustible stream of rhythmic patterns, phrasings, and styles all through the means of percussion.

As time progressed, by the early 21st century,Latin Jazz gained popularity and critical acclaim as well as became one of the most dynamic and diverse components of the Jazz World.