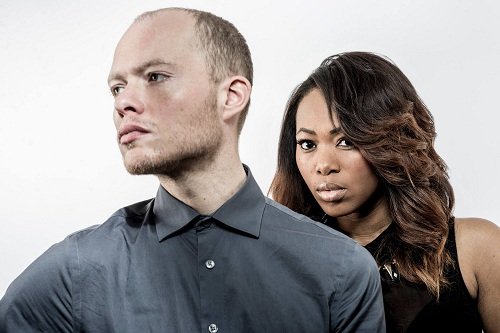 Reese is a singer whose style encompasses jazz, soul, r n b, and gospel, with a voice that just has to be heard. From beautiful intimacy to soaring soul diva, Reese brings a ‘Wow’ factor to any stage or event. Andy is a guitarist with a strong creative ear, and a unique style and sound that complements Reese’s vocals perfectly. Together, their performances turn heads, and win them new fans wherever and whenever they play.

Reese and Andy have been playing live soul and jazz together for several years. Their partnership has taken them to many showpiece functions, events and gigs. Keynote appearances for corporate and blue chip clients, and wedding functions at several prestigious London venues have included:

Client Comments
Corporate Clients
“Sincere thanks to Denyse and Andy for helping to make our office launch a huge success. You managed to hit on exactly the right balance between professionalism and having an obvious love for the music. As a result, our guests were able to enjoy the programme without it dominating proceedings. We’ll certainly keep you in mind for future events, and wouldn’t hesitate to recommend you to other companies.”
– Colin

“Thank you again for last night, you were great and so well received by the audience and crew. We really enjoyed having you and will do so again when the event lends itself to your talents!”
– IK Investment’s 20th anniversary celebrations at The Oxo Tower, London

“Dear Reese and Andy. Thank you for Friday. I have had so many compliments as to your music. You helped to make it a great night. Thanks.”
– Chris (corporate leaving function for Southwark Council member)

“Thanks for creating such a gorgeous atmosphere for us on Saturday, everyone was absolutely delighted.”
– Susan, BSc (Hons) Solicitor & Former Employment Judge

Wedding Clients
“Andy and Reese – wow! I’m speechless! You guys were worth every single penny, and more! The only time I had a tear to my eye the entire day was hearing Kissing You, during my ceremony – it was amazing! You guys were exactly what I’ve always wanted.Thank you both so much, you left a really good impression with my guests, you two were all everyone was talking about! Good luck with the future – its gonna be a good one!”
– Dominee

“So glad that you enjoyed playing at the wedding – you were certainly one of the top highlights of the day! We have had so many amazing comments about you from our guests, including ‘best band I have ever heard’, which can’t be bad!”
– Sarah & Pete

“I just want to thank you both for last week, the performance was excellent and everyone totally enjoyed it.”
– Keisha

“We loved your performance, the comments, style of running the whole event, very gentle and not imposing! The vibes were amazing, and there was something about your singing, no idea what it was, but it certainly gave me a fever :o)!”
– Sylwia & Wayne

“We’d like to give our sincere thanks to Reese and Andy for entertaining our guests at our wedding reception. We arrived at the venue to find our guests thoroughly enjoying their laid-back sounds, which contributed to a fantastic atmosphere. As we circulated the room both my (new) wife and I received many complementary comments. Many thanks again for contributing to our special day.”
– David & Danielle

Live Restaurant and Bar Entertainment Clients
“Reese and Andy have been highly valued and respected artists in our vibrant and diverse live bar music programme at Theatre Royal Stratford East for many years now. Accomplished performers, they strike the perfect chord with a loyal and constantly growing crowd of supporters, and they never fail to win over new fans and theatre-goers each time they play.”
– Kerry, Artistic Director

“Reese Robinson and Andy Black are seasoned performers and always put on a fantastic show at our restaurant.”
– Robert, restaurant owner

“Thank you so much for a great performance, everyone really enjoyed themselves and we will certainly be in touch for future events”
– Miles & Ania

Repertoire
Reese & Andy have a wide and extensive repertoire of songs available for their performances. This ranges from:

A full repertoire list available on requests. The emphasis throughout is on classy songs, reworked in a unique fashion to showcase Reese & Andy’s talents, and to provide a truly memorable musical backdrop to your event.