They also have played for Her Majesty The Queen, Prince Charles & Camilla – at The Grand Ballroom in Buckingham Palace and for Paul McCartney’s wedding and Elton John’s birthday. Remix is definitely not a bunch of musicians that stand and politely go through the motions. They are the Ultimate Party People! If you want to see horn players starting a conga-line, the guitarist encouraging guest to assist in a wild solo, the singer serenading people even outside the room and the bass player doing the occasional backslide across the dancefloor mid song, then this the band you need to hire. 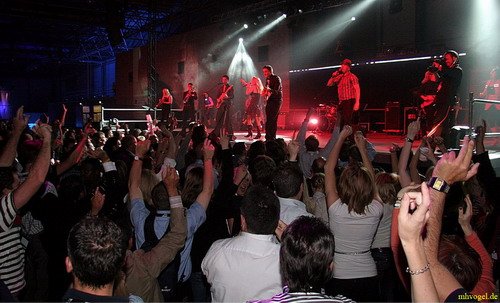 A Party Band for every occasion, big or small, lively or mellow. Specializing in pop, rock, disco, funk, soul, rock n’ roll & jazz. Whatever your requirements, they can provide the music to make your evening unforgettable. They can also provide a set of ‘Live Band Karaoke’ with Pop Idle if you & your guests fancy strutting your funky stuff! Remix create the perfect atmosphere & ambience whatever the occasion with their wealth of experience, unrivalled enthusiasm, energy & a passion for having fun!

Dream Themes… As well as the famously funky party band, Remix are also able to ‘slip into something more comfortable’ if your event has a special theme. Whether it is a flare-fest from the sequinned Studio 54 doing all that’s groovy from the 70s, shouting Aloha! in a beach party theme in grass skirts & leis with the Hawaii 5-0s, donning a naughty schoolgirl uniform as The Prefects to whisk you back to a Skool Daze , or maybe Catwoman, Superman & Co as The Groovie Movie Band, or get ‘shagadellic baby’ in an Austin Powers theme with Mojo, try a rock-up with anthems & pop/rock classics from Rock-it, or add a chunk of cheddar for the Ultimate Cheese Party Live, playing all the classics you love and from YMCA to D.I.S.C.O.

Remix can also offer dinner jazz, cocktail piano, trumpet fanfares & various reception/background music ensembles. In suave & sassy attire to suit your event or spangley flares, sequins & afros for a 70s extravaganza or movie/superhero costumes for a Hollywood theme. They have the flexibility to cater for a specialized audience/theme, or perform as a normal, albeit vastly superior function band. All this topped off with a pumping disco, lights & full PA & all the trimmings to keep the party going as long as you can take it!

They can play in various costumes to suit your occasion or a set of both styles. They can be booked as a various line-ups from a 5-piece to a 10-piece & beyond for a real red carpet performance. Their standard line-up is 8-piece with 4-piece rhythm section, 2 horns & 2 singers (male & female, plus backing vocals from within the band). This can be trimmed to a 6-piece without horns, or augmented with percussionist, additional horns & singers & dancers. All the musicians are accomplished professionals & are self-contained with a full 5k PA adaptable for smaller venues or augmented for 500 people or more. They have lighting for the band or stage and a disco run by themselves taking requests (or a dedicated DJ on request). They also use professional radio mics for singers, horns & guitars for lots of audience interaction, energy & the fun and funkiest show you’ve ever seen!

Dance The Night Away

Fly Me To The Moon

Let Me Entertain You