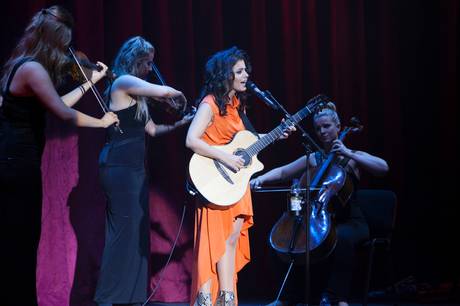 Katie Melua & The Rococo String Quartet – The closest thing to crazy (live AVO Session) from Music for London on Vimeo. 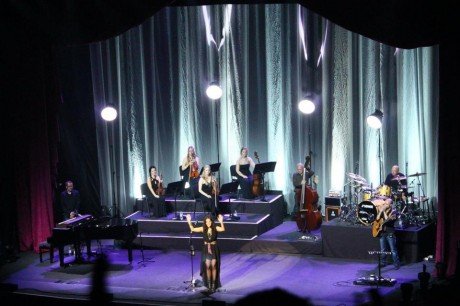 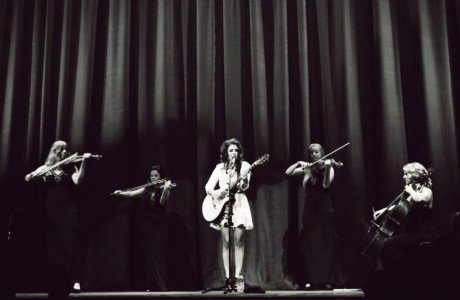 Upon entering the grand setting of Bristol’s Colston Hall, and being greeted by a calm, sophisticated, elegant, dare I say “exclusive” ambience surrounding the atmosphere inside, it was clear this was to be an experience differing from my usual jaunts into the world of music, usually taking place in grotty sweatboxes, watching the latest dance act, rock god, or indie machine.

This was a sit down affair with a new set of rules, a softer etiquette, and I certainly won’t be referring to it as a “gig”. It was a real “grown-up” experience, and being surrounded by so many intellectuals and “posh” folk, I could’ve easily felt a little out of place in the expensive seats, but the audience around me were chatty, approachable, polite and endearing. It was a really sweet and charming atmosphere.

Katie Melua is supported on this tour by Boy; a female duo from Germany. A gem of a band that I had not been aware of before, but will certainly be checking out in the future.

Boy provided me with the freshest sound and most infectious and contagious brand of musical story telling that I have been introduced to in a very long time. They were a delightful bunch who sang from the heart and told wonderfully soulful, personal stories with their own unique, soft and heart-warming musical talents.

The audience were fully concentrated, committed, and open to the support act, which again is not something I’m wholly used to, but seeing as Boy were so immensely talented with infectious attitudes to what they were doing, it was no wonder.

They are a multi-talented group that spread their expertise over several instruments, including a handful that I have never seen before, all of which created beautiful and unique sounds.

Boy tuned into my emotional side and listening to their sweet music was metaphorically like being gently rocked to sleep by a loving mother singing you a soft lullaby. I may lose man points here, but for the entirety of their set the world felt good, kind, and safe and I loved every single minute of it, and was more than happy to succumb to their gentle persuasions. You could settle wars with this stuff.

Boy’s gentle plucking of your heart strings and their soothing melodies warmed the audience nicely into the pleasant and warm atmosphere that drifted seamlessly into Katie Melua’s delicate entrance; she drifted onto the stage carrying her acoustic guitar, all alone in front of the red velvet curtain; it was so understated, yet so fitting to the ambiance inside the hall.

I thought Katie may have left herself with a hard act to follow, but that idea was totally undone with her first number. She instantly demonstrated her exceptional range and her voice filled every empty inch of the room. I was totally blown away by not only the power and intricacy in her voice, but how she managed to keep it so quaint, graceful and of course faultless throughout.

After a few tender, gracious and sentimental solo numbers, Katie introduced the audience to the Rococo string quartet who have joined her on her 2012 tour, which she openly admits was as new to her as it was to us, and maybe could have been a bit of a gamble. She needn’t have feared as the added specialities of four talented girls instantly added another level of excellence to the concert and sent the appreciation factor into the stratosphere, the accompanying music that they played complemented Melua’s blissful and angelic voice beautifully and was atmospheric, alluring and almost dream-like.

The biggest applause of the night was for Katie’s rendition of The Closest Thing To Crazy, which just so happens to be one of my favourite songs; eyes widened, hearts swelled and the soul of the venue bubbled with emotion. It was heavenly, and with the added talents of Clementine Vale (of the  Rococo String Quartet  – The Rococo String Quartet are currently backing up Katie Melua for her European tour) on the cello it was probably the highlight of the evening, which was bulging with standout moments.

I could have listened to, and wandered in her soulful, intimate storytelling for the duration and left totally fulfilled, however around the twenty minute mark she changed gears and a big band were introduced behind her, previously hidden by the aforementioned velvet curtain.

The concert became a huge, blistering event with Katie continuing to change gears and maxing out every single one. We got blues Katie, jazz Katie, country Katie and even pop Katie, and the transitions between each were smooth, and tackled with consummate ease.

Then came the sultry Katie, playing up to her beauty with a flirty and devilish side that captivated the audience and enchanted everybody even more.

I have never seen an act go through so many different levels of excellence during a performance and she even managed to shatter her own easy-listening label with a few show-tune-esque numbers. It would’ve been impossible to become bored, and there was something here for everyone.

On more than one occasion visions of Shirley Bassey in her prime flashed through my imagination whilst absorbing everything Katie had to offer and Eva Cassidy’s influence on her styling’s were also clear to hear and even more so when she breezed into a dainty rendition of Enchanted.

I felt totally humbled throughout and almost not worthy, it was a memorable experience not only in musical genius but in human nature too. This is what hearts are made for, and it would be impossible to express the influence Katie has on you when she opens up her heart and drowns you in her passion with words alone.

I felt like a better person having been a part of such a wonderful showcase and for me the concert epitomised the influence music can have on us and our emotional wellbeing.

The rapturous applause at the end of the performance went on for a full five minutes, with the whole room buzzing with admiration and affection.

She ended with a personal touch asking the audience what song they would like her to end with; we went with Katie’s version of the fascinating and gorgeous Lilac Wine which brought the concert full circle, ending back on Katie’s softest side, caressing her audience back into a soothing, mellow finale which of course was greeted with a standing ovation.