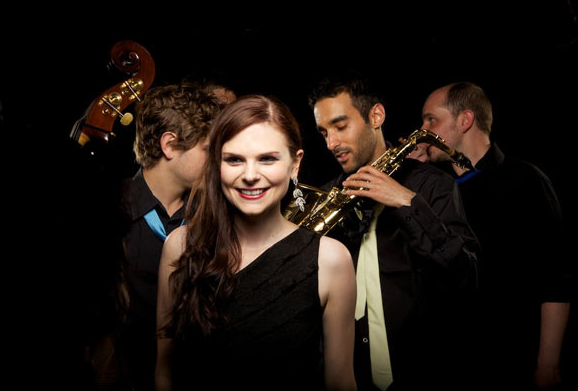 Katie and the Boys came to be as she was looking for a way to fuse her ability as a classical pianist with a modern day twist by using a band.

She is keen on creating a show that is lively, accessible and altogether cheeky to reflect the more vibrant side of herself as a performer.

Katie wants a show that allowed the performers to have fun on stage, and through their own enjoyment entertain the audience.

It is, in essence, a piano variety show, as not only does she work with the band, she also sings some comic songs which she has written and arranged, and also play some solo piano pieces.

However, the heart and soul is the interaction between Katie at the piano, and the boys in the band. Katie works alongside two arrangers to create a unique style of music, blending everything from jazz, classical piano, film and even television show themes.

Tom Deering, a composer and musical director from London who has worked on several film, television and theatre projects as an arranger, composer, conductor and pianist, was the genius behind several of the arrangements.

They have worked closely together to create pieces that are catered to her abilities as a virtuoso classical pianist, but also bring in the band.

The creations include Bumblebee Boogie, a fast and furious take on the Rimsky-Korsakoff’s ‘flight of the bumblebee’ underpinned with a boogie-woogie style, Autumn Waltz, which is a slow and relaxed fusion of Bill Evan’s Waltz for Debbie and Autumn Leaves, and Back to the Jaws Wars, a blend of famous film tunes throughout the ages.

The other composer Katie has worked alongside is Andrew Lynwood. A composer, pianist and producer from London, Andrew also recorded and produced Katie’s classical CD in the summer of 2011. He brought a different feel and style to the music creating two ‘jazzed-up’ Bach pieces.

Andrew was able to produce arrangements that, although very different from Toms, still fused classical piano, with the modern twist of drums and bass. And so after months of hard work and trial and error, Katie and the Boys was born!.

Katie and The Boys Are –

Having heard several of Katie’s concerts, I appreciate not only her excellent playing but also the charming way she describes the pieces and composers. In addition, her anecdotes make for a thoroughly enjoyable evening for all.
– Wendy Tholen

On a balmy July evening, the Friends of the Old Granary Concerts Trust were again delighted by Katie’s piano recital. She described each piece in a most entertaining manner and together with her beautiful gown really wowed the audience with her wit and vibrancy. We are all looking forward to the next occasion.
– Rosemary de Vere, Chairman of the Board of Trustees

Katie was just the right person to ask to play at a recent family 90th birthday lunch. She had carefully chosen pieces to suit the age group of the guests, spoke with interest about them before the concert and her performance was outstanding. Everyone loved her and she is an asset to have to any occasion. We can highly recommend her.
– Mike and Jane Wickstead