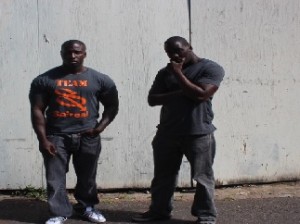 The Locksmiths are a Hip Hop duo based in west London and are slowly emerging from the underground scene. After years of developing & nurturing their talent, The Locksmiths have been involved with & released a number of projects & mixtapes including 90’s Degrees (mixtape tribute to 90’s hip hop), British Weather (mixtape tribute to british music), The Red Tape ep and The Sa’real Hustle Mixtape hosted by Dj Ames. With this came along a series of net videos & freestyles which earned the duo a lot more recognition & credibility for their music.

Their latest 2 mixtapes earned them countless reviews and acknowledgement which The Locksmiths have now put themselves in a position for ones to look out for in the upcoming months.
Both members are known for their unique rhyming style & raw edge, which blend perfectly together both in studio & on stage.

The Locksmiths not only give you an insight of their life through their music but have also found and perfected the art of being able to story tell through music as well as bringing you that club commercial feel for the wider audience.

Influenced by everyday life experiences and artists such as Busta Rhymes, A Tribe Called Quest and Nas helps allow the duo to escape from the one dimensional stereotype rapper to much more versatile artists. Promising to deliver a wide variety of music from street life, conscious to the commercial club scene The Locksmiths are definitely without a doubt an act to look out for this year.