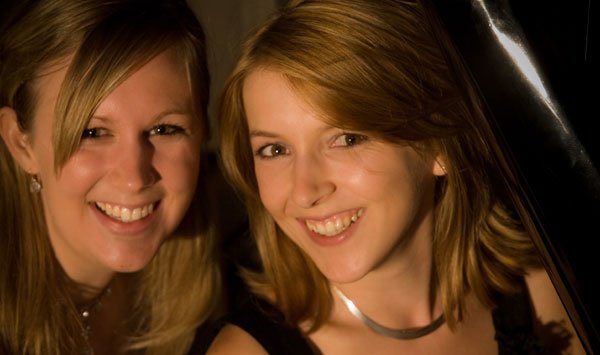 Kate and Katie started performing together in September 2006. They have recently graduated from the Guildhall School of Music and Drama (GSMD), London.ENQUIRE ABOUT BOOKING

Duo Astrea has given recitals in London, with venues including: The Royal Society of Medicine, Wimpole Street; the Ritz Hotel, Piccadilly and Cumberland Lodge, Windsor.  The duo has also performed across the south of England.  Their future engagements include a summer recital series in South France, August 2009.

The Duo is available for corporate functions, weddings, lounge music, recitals, and other performance occasions.

Kate graduated with a First from GSMD where she studied flute with Philippa Davies and Sarah Newbold, and piccolo with Sharon Williams. She was awarded a scholarship to continue her studies on the MMus course at GSMD.

Her recent appearances have included ITV’s Record of the Year and the London production of ‘Les Miserables.’ This year Kate won the prestigious Needlemakers’ Competition and the ‘Ivan Sutton’ chamber music prize.

Kate was Principal Flute of the National Youth Wind Ensemble, CBSO Youth Orchestra and Midland Youth Orchestra. She has toured to Belgium and Holland playing with ‘Zomeropera’ in a ‘Carmen’ project, as well as playing for Cruise ships.

Katie started playing the harp during her years as a chorister at Salisbury Cathedral.

As a solo harpist, Katie has performed at venues such as the Royal Institute of British Architects, The Gherkin and Le Meridien, festivals including Southern Cathedrals’ Festival and Calne & Melksham Festival. In 2005, she performed the world premiere of trio Azaleas by Gary Carpenter at the Holywell Showroom, later played on BBC Radio 3.

Katie has played with orchestras including the English Sinfonia, National Youth Orchestra of Great Britain, Guildhall Symphony Orchestra and Sarum Orchestra, working with conductors such as Marin Alsop, George Benjamin and Andrew Litton, performing in the major concert halls in Great Britain.

Katie studied with Charlotte Seale at GSMD and now continuing her harp studies with the renowned harpist Sioned Williams.

This list is by no means exhaustive; it is representative of the styles of music we play.

Entr’acte  – from the Third Act of Carmen

Chopin – Variations on a Theme of Rossini

Elton John –  Can you Feel the Love Tonight

Mendelssohn – *On Wings of Song